SHINE: the Table of Contents

As a way to close off 2009, while simultaneously promising something for 2010, here is the Table of Contents for the Shine anthology (UPDATE: Shine has been released in the USA March 30, and in the UK April 15; story titles link to story excerpts, complete with pictures, review quotes, exclusive interviews & interactive maps; in some cases to podcast or even the full text; author names link to their websites): 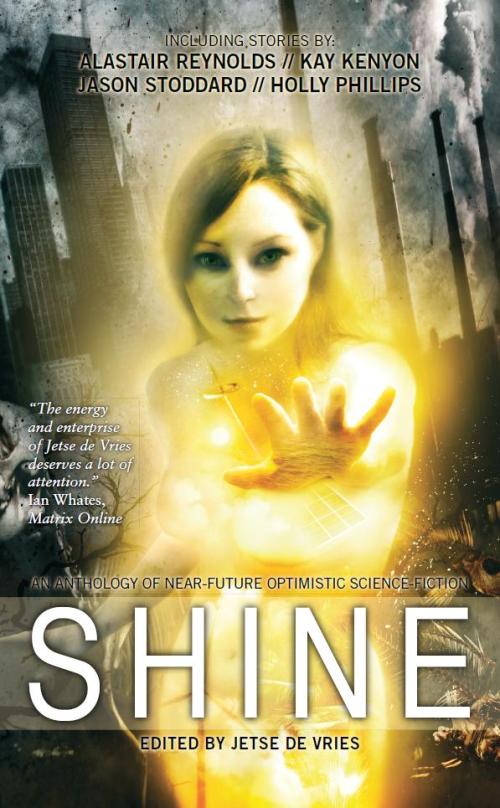 UPDATE: here are some review quotes:

That’s why Shine is such a significant — dare I say, historic — anthology. And with a rich diversity of settings and thematic speculation, this is a collection most science fiction fans will undoubtedly embrace.

…just about a textbook example of how to do it…

Having read hundreds of anthologies it isn’t often that I want to revisit one soon afterwards, Shine is definitely one such.

Overall, Shine is utterly worth reading.

On all counts, it’s a rousing success, the very model of a modern project, and points the way toward a healthy future for SF short stories.

But it would be difficult — some might say doubly impossible — for every entry in an anthology as ambitious as Shine to appeal to every reader. It is to de Vries’ credit that all but the most hard-hearted of sci-fi readers should find their own brand of optimism represented somewhere among Shine’s array of bright futures.

But if we are to have some some influence over how that change unfolds, isn’t it important that our stories, whether they be in the news, on television screens or in the pages of science fiction novels, fully explore the optimistic possibilities that technology represents?

To round off this very long review I’m happy to report that Shine was a truly fascinating and enjoyable read. I’m not the biggest SF fan in the world, but I’ll happily promote this to others who, like me, feel the same way. Here are authors with stories and characters I could relate to. But then, I suspect hardened SF readers out there will devour this with gusto. Jetse de Vries has done a truly remarkable job putting Shine together and I’d like to be signed up to read any follow-up anthology because this one has genuinely broken down some preconceived ideas I’ve had about the genre.

For an anthology with a very tight remit — optimistic near-future science fiction — there is a huge variety in the stories themselves. It occurs to me that this book is the perfect introduction to SF for readers who wouldn’t normally venture into the genre.

The diversity of the stories and the consistently high quality of this collection is testament to his passion for this project. […] A shining example of what positive thinking can achieve.

SHINE is slated for an April 2010 release. I am working on an official SHINE launch party at Odyssey, the 61st British National Science Fiction Convention. More news as it happens.

In the meantime, DayBreak Magazine will feature—apart from other great, near-future SF stories—excerpts of the stories (two at a time).

2 responses to “SHINE: the Table of Contents”