Every first and third Friday of the month there will be two story excerpts from the Shine anthology. This is the tenth one: “At Budokan” by Alastair Reynolds:

I’m somewhere over the Sea of Okhotsk when the nightmare hits again. It’s five years ago and I’m on the run after the machines went beserk. Only this time they’re not just enacting wanton, random mayhem, following the scrambled choreography of a corrupted performance program. This time they’re coming after me, all four of them, stomping their way down an ever-narrowing back alley as I try to get away, the machines too big to fit in that alley, but in the malleable logic of dreams somehow not too big, swinging axes and sticks rather than demolition balls, massive, indestructible guitars and drumsticks. I reach the end of the alley and start climbing up a metal ladder, a ladder that morphs into a steep metal staircase, but my limbs feel like they’re moving through sludge. Then one of them has me, plucking me off the staircase with steel fingers big enough to bend girders, and I’m lifted through the air and turned around, crushed but somehow not crushed, until I’m face to face with James Hetfield out of Metallica.

“You let us down, Fox,” James says, his voice a vast seismic rumble, animatronic face wide enough to headbutt a skyscraper into rubble. “You let us down, you let the fans down, and most of all you let yourself down. Hope you feel ashamed of yourself, buddy.”

“I didn’t mean…” I plead, pityingly, because I don’t want to be crushed to death by a massive robot version of James Hetfield.

“Buddy.” He starts shaking me, holding me in his metal fist like a limp rag doll. 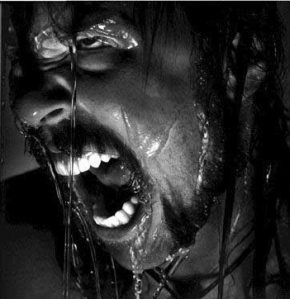 But it’s not James Hetfield shaking me to death. It’s Jake, my partner in Morbid Management. He’s standing over my seat, JD bottle in one hand, shaking me awake with the other. Looking down at the pathetic, whimpering spectacle before him.

“Having it again, right?”

“Buddy, it’s time to let go. You fucked up big time. But no one died and no one wants to kill you about it now. Here.” And he passes me the bottle, letting me take a swig of JD to settle my nerves. Doesn’t help that I don’t like flying much. The flashbacks usually happen in the Antonov, when there’s nowhere else to run.

“Where are we?” I ask groggily.

“About three hours out.”

“From departure. Got another eight, nine in the air, depending on head-winds.”

I hand him back the bottle. “And you woke me up for that?”

“Couldn’t stand to see you suffering like that. Who was it this time? Lars?”

Jake gives this a moment’s consideration. “Figures. James is probably not the one you want to piss off. Even now.”

“You need to chill. I was talking to them last week.” Jake gave me a friendly punch on the shoulder. “They’re cool with you, buddy. Bygones be bygones. They were even talking about getting some comp seats for the next stateside show, provided we can arrange wheelchair access. Guys are keen to meet Derek. But then who isn’t?”

I think back to the previous evening’s show. The last night of a month-long residency at Tokyo’s Budokan. Rock history. And we pulled it off. Derek and the band packed every seat in the venue, for four straight weeks. We could have stayed on another month if we didn’t have bookings lined up in Europe and America.

“I guess it’s working out after all,” I say.

“I had my doubts. From a musical standpoint? You had me convinced from the moment I met Derek. But turning this into a show? The logistics, the sponsorship, the legal angles? Keeping the rights activists off our back? Actually making this thing turn a profit? That I wasn’t so certain about.”

“Reason I had to have you onboard again, buddy. You’re the numbers man, the guy with the eye for detail. And you came through.”

“I guess.” I stir in my seat, feeling the need to stretch my legs. “You—um—checked on Derek since the show?”

Jake shoots me a too-quick nod. “Derek’s fine. Hit all his marks tonight.”

Something’s off, and I’m not sure what. It’s been like this since we boarded the Antonov. As if something’s bugging Jake and he won’t come out with whatever it was.

“Killer show, by all accounts,” I say.

“Best of all the whole residency. Everything went like clockwork. The lights, the back projection…”

“Not just the technical side. One of the roadies reckoned Extinction Event was amazing.”

Jake nods enthusiastically. “As amazing as it ever is.”

“No, he meant exceptionally amazing. As in, above and beyond the performance at any previous show.”

Jake’s face tightens at the corners. “I heard it too, buddy. It was fine. On the nail. The way we like it.”

“I got the impression it was something more than…” But I trail off, and I’m not sure why. “You sure there’s nothing we need to talk about?”

“Fine.” I give an easy smile, but there’s still something unresolved, something in the air between us. “Then I guess I’ll go see how the big guy’s doing.”

Alastair Reynolds was born in 1966. His first short fiction sale appeared in 1990, and he began publishing novels ten years later. Chasm City, his second novel, won the British Science Fiction award in 2002. His ninth novel, Terminal World, is due imminently. He is about to embark on an ambitious and broadly optimistic trilogy documenting the expansion of the human species into solar and then galactic space over the next 11,000 years. A former scientist, Reynolds worked for the European Space Agency until 2004, when he turned full-time writer. He is married and lives in Wales, not too far from his place of birth.

Also, check out the exclusive interview Charles A. Tan with him at SF Signal.

Alastair Reynolds’s At Budokan is a little bit Jurassic Park-ish, a little bit Guitar Hero gone wild. I’m at a slight loss for words with this one because it’s so amusing, so tongue-in-cheek… can you imagine a T-Rex bio-engineered to play guitar and sing? Yeah, I wouldn’t have thought about it either, but then Mr. Reynolds did and with such great plausibility that I’m happy to trade in my doubt for a pair of tickets to the next gig Derek the T-Rex will be rocking at! But all joking aside, within the space of this short story evolution is at work and the creator of Derek realises that the dinosaur he had created was improvising the music he was forcing it to play. It wasn’t something he anticipated. And it made me smile grimly because why do people insist on mucking around with nature, especially if nature has big-ass teeth?

Then there’s At Budokan — Alastair Reynolds’ tale of a bio-engineered musician with a big difference.

Alastair Reynolds At Budokan is a rollicking romp through the future of heavy metal.

But then there are gems like Alastair Reynolds’ At Budokan, in which T. rexes are cloned, genetically engineered and handed giant Gibson Flying V guitars to grind out heavy metal with. What could possibly go wrong? Nothing! Nothing can go wrong! Even when something goes a tiny little bit wrong, it’s all just rock ‘n’ roll, baby. Now that’s some sci-fi!

At Budokan by Alastair Reynolds is a story wherein the author isn’t afraid of giving his imagination free reign. Reynolds manages to combine elements that on paper seem ridiculous for a science fiction story but here, he makes it work. What’s surprising is that whereas the other stories tackle massive and ambitious social change, At Budokan has modest goals. This perhaps isn’t the most socially-relevant piece you’ll read in the anthology, but for me this was the most fun.

An interactive Google Map of story locations from the SHINE anthology:

7 responses to “SHINE excerpts: “At Budokan””